The accession to the gallery reminds one of entering a sacred arena where a rite is taking place. The artist is the one who commands the whole rite, determines its dynamics and influences the overall atmosphere in the room. The gallery visitors become participants of the rite upon entering the site. An unconscious connection arises between them and the artist – a two-way dialogue in which a ritual full moon occurs. It is the experience of participation and unconscious union – “participation mystique”.

The artist initiating the rite activates the archetypal pattern, substitutes a clergyman or a shaman and by means of a performance gets in touch with unconscious contents, which he mediates to the participants by means of visual gestures, images and sounds.

If consciousness is the prime principle of being and if our psyche is in reciprocal relationship with the whole existence and the overall cosmic principle, then the unconscious connection activated by the rite can facilitate experience which we find represented in different spiritual and mystical traditions, such as Buddhism, Taoism, Sufism, Christian mysticism, the Quaballa and other spiritual systems.

The site-specific installation Spirit World Rising (named after Daniel Johnston’s song) at the Kostka (Cube) Gallery presents a ritual scene, consisting of the visual database of Anežka Hošková and Anders Grønlien, collectors of symbols and spiritually charged motives. It is a gesamtkunstwerk connecting two artists and various media– installation, statue, music, performance and documentation. More so it is a connection between space and time, form and meaning, life and matter or the conscious and the subconscious.

Anežka Hošková (Czechia) represents the mystical associational painting and drawing and the post-internet aesthetics. Her psychedelic style compositions are often the outcome of connecting mystical and religious symbols, expressive appearance and strikingly reduced artistic expression. Anežka Hošková is the cofounder and active member of A.M.180 Collective. 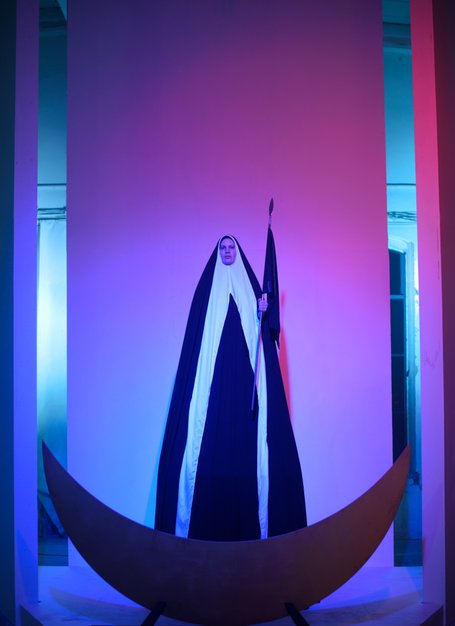 If there is one thing that art can do, it is to bring uncertainty.

All the rest is probably much discussable, but if I have one argument for the existence of art, it is to disrupt the frames and scenarios we perceive the world around.

I would rather claim that the event and the settings are entirely serious and in the core real, as much as entirely ironical and staged.

And not only those two possibilities, but including all the possible stages in between them. And precisely this uncertainty, the unwillingness to take a clear stance - on the contrary the accentuation of simultaneously undermining statements - is what makes all the strength of the resulting artwork.

Nowadays it is anyway impossible to say something absolutely serious, without this being, at least in potential, received as entirely ironical.

A key is never the statement itself, but always the “genre” in which we find it. Without genres we would be never able to process those quantum of information we are exposed to. Finding the points of reference and understanding in which genre we are right now, is also something we are probably the most sophisticated in the history. Maybe we are also the most time bound, most conscious about how everything is embedded in time, from which era it comes or refers to. By genre meaning of course not only a movie genre, but any kind of cultural situations, whether material or not, as any utterance, gesture or object immediately brings long line of associations.

So the only way out is to deal with something so un-doubtful as the “truth that is revealed,” so unbelievable nowadays. And further supplemented with a range of religious symbolism, each of them so emotionally and in itself contradictorily loaded with associations, that at first it feels like a complete unreadable chaos. In this experimental syncretic seance, however with almost cartoon like character of the stage set, the two masters of ceremony further tears the newcomer into pieces.

Anežka in her Apolinian dream state, an artist becoming herself a sculpture, the merging with beautiful illusion. Anders ingesting the narcotic drink, capers and sings, the coming of the spring, destroys the individuality with the mystical feeling of unity. The merging with the energy of life, the wall against the actuality.

But maybe in all that something else appears. Like if the heaviness of each part and the tension between all, made together a heaviness that became finally totally light and liberating. All the weight creates a new gravitational field curving the circulating objects.

One concept that burdened the thinking of the last two centuries was the idea of the eternal truth and its accessibility to human mind. And nothing has been probably more criticised in the last century. So of course after all, we have a beer and go home. But when the truth was performed, for that time, we may believed it. Not former nor the latter, also not just them together, but rather a certain bend, a stretch, the third reading.